Several articles tell of aspartame being in E Cigarettes.  Here is one:  https://academic.oup.com/ntr/article/18/11/2169/2399292  – and mentioned here: https://www.juicedb.com/tag/aspartame   Sucralose is also used in E Cigarettes and the manufacturer did admit to one Sucralose victim that in original studies it did cause seizures.  She asked why wasn’t it known and was told “well, there weren’t a lot of seizures.”  Dr. Morando Soffritti of the Ramazzini Institute who did the aspartame studies showing it to be a multipotential carcinogen also did a study on sucralose showing it is a carcinogen as well.  It was developed by an insecticide researcher.

Aspartame is a well known seizure triggering drug.  One of the pivotal studies, a 52 week oral toxicity study on 7 infant monkeys, showed aspartame caused 5 to have grand mal seizures and one to die.  Pivotal studies are your best studies used in the approval of a product.  Here is the FDA report of 92 symptoms and you will notice they list four types of seizures triggered by aspartame.  http://www.mpwhi.com/92_aspartame_symptoms.pdf

Here is a typical history of aspartame and seizures:

“I used to drink only Diet sodas, eat anything Diet, “Lite” Low calorie. I was always intent on trying to lose weight. Then I started having seizures – strong enough ones that I almost died. I was revived 3 times. Then the shakes started, and the “brain fog”, lack of concentration, unable to reason, I couldn’t walk without a cane. I was diagnosed with Parkinson’s Disease, and given heavy duty drugs. Since one should not drink alcohol with Parkinson’s meds, I would always order Diet soda’s when out for the evening…. Constantly continuing to poison my body, unbeknownst to me. I was taking Parkinson’s meds for 6 years before a new Neurologist discovered that I didn’t have the deadly disease after all, but what I had was Aspartame poisoning. Years of violent shaking and stammering, of seizures, of living like an idiot who couldn’t think like a rational person, and it was all because of Aspartame. I now avoid it like the plague. If my story helps ONE person, I will be happy. Please don’t eat or drink anything that says Diet, Low Cal, or sugar free without reading the labels. No-one should go through what I did.”

Dr. Woodrow Monte, author of “While Science Sleeps:  A Sweetener Kills”, www.whilesciencesleeps.com took the issue of aspartame and seizures all the way to the Supreme Court who refused to hear it.

Aspartame and seizures are in many medical texts such as “Aspartame Disease: An Ignored Epidemic” by H. J. Roberts, M.D. and “Excitotoxins: The Taste That Kills” by neurosurgeon Russell Blaylock, M.D.  These doctors have several books.  At the bottom of this leaked email on aspartame is the movie “Sweet Misery: A Poisoned World” which answers all questions on how this chemical poison got marketed for human consumption:  https://www.aspartame.news/2017-02-03-leaked-emails-mention-aspartame-causing-holes-in-brains-of-mice.html   Here is an article from l986 when Dr. Richard Wurtman of MIT had already collected 86 cases of aspartame and seizures:  https://www.sun-sentinel.com/news/fl-xpm-1986-04-24-8601240744-story.html   Notice there is an article  calling Diet Coke, the New Smoking because of the aspartame.  https://rense.com//general96/diet-coke-the-new-smoking.html

One of the biggest problems today is that aspartame is being added to products without labeling which is against the law because it requires a PKU warning for phenylketonurics. As an example, some years ago I mentioned that creatine by GNC has aspartame in it and not labeled.  An executive of GNC called me upset that I had told the public.  How did I find out it was in the product?  I looked up the patent and there it was.  More and more this poison is being used unlabeled while the FDA not only sits by and does nothing but actually allowed it in 17 dairy products unlabeled.  The jam people also asked the FDA to be allowed to use it unlabeled, and they refuse to answer the question.  It is getting to the point that the only way to find out whether aspartame is in a product is to have it analyzed.  Recently Dr. Erik Millstone, a scientist in England did a study proving aspartame was never proven safe and has asked for it to be banned in the UK and EU.   https://archpublichealth.biomedcentral.com/articles/10.1186/s13690-019-0355-z 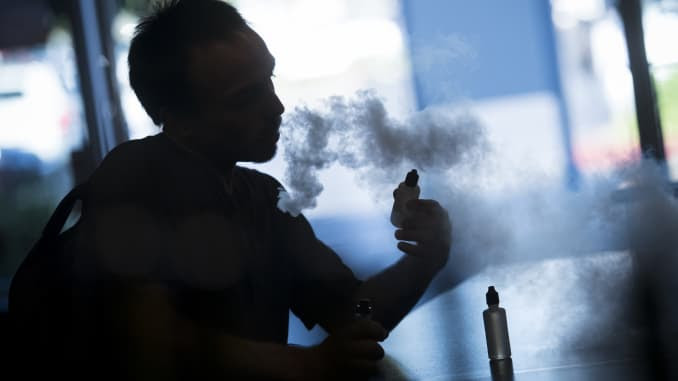 A customer holds a bottle of flavored vape juice while exhaling vapor from an electronic cigarette at the NXNW Vapor store in Sacramento, California.
David Paul Morris | Bloomberg | Getty Images

The Food and Drug Administration is investigating 127 cases of people suffering from seizures after vaping, the agency announced Wednesday.

The agency received about 92 new reports of people, especially kids and young adults, experiencing seizures after using e-cigarettes since it first announced its investigation into the issue in April. The FDA said it’s unclear whether e-cigarettes caused the seizures and cautioned these cases occurred over a 10-year period.

When the FDA announced its investigation in the spring, it asked for people to let the agency know if they had ever experienced this. The FDA on Wednesday again encouraged people to report if they had seizures after vaping. 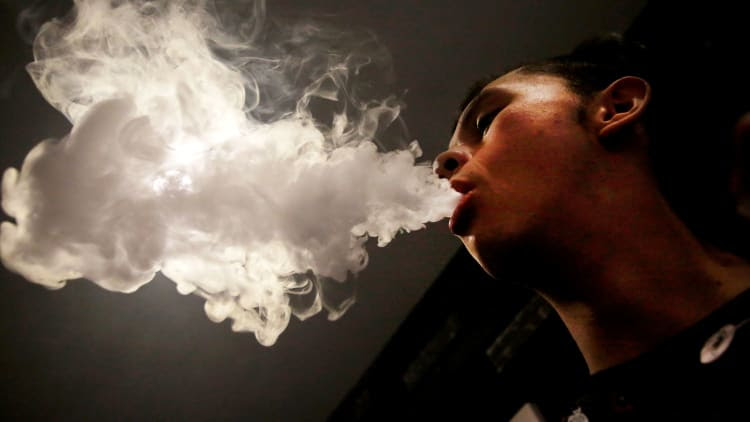 “We appreciate the public response to our initial call for reports, and we strongly encourage the public to submit new or follow-up reports with as much detail as possible,” acting FDA Commissioner Ned Sharpless said in a statement.

“Additional reports or more detailed information about these incidents are vital to help inform our analysis and may help us identify common risk factors and determine whether any specific e-cigarette product attributes, such as nicotine content or formulation, may be more likely to contribute to seizures,” he added.

E-cigarette liquids contain high concentrations of the nicotine. If swallowed, they can be poisonous, often causing nausea, sweating, dizziness and tremors, according to the National Capital Poison Center. In severe cases, nicotine poisoning can cause seizures or even death.

The FDA said the evidence it has analyzed so far doesn’t establish a clear pattern or cause for the cases. It also said the additional reports “do not necessarily indicate an increase in frequency or prevalence” of seizures among people who vape.

Former FDA Commissioner Scott Gottlieb told CNBC it was expected the FDA’s initial announcement would garner more reports, “but 92 additional reports over that short period of a time is concerning.”

The aspartame industry pays millions to the Methanol industry to keep them quiet as Dr. Monte will tell you.    I agree with you Dr. Monte’s book is the answer against industry, along with prosecution and some other ideas.

Nasty industry is not only just ignoring the report but writing its safe and I have to keep answering all the hogwash and creating a showdown to stop them.   There needs to be some prosecution but industry is so powerful.

Yes, the sweetener industry is trying to overshadow the report.  I just answered them a few minutes ago.  Here is what I wrote:

A recent letter by a Sweetener Assoc said aspartame is safe and It is critical the public is provided with reliable science-based information regarding the safety and utility of low-calorie sweeteners.  Aspartame was never proven safe and sweetener organizations notoriously defend manufacturers.   The FDA attempted to have G. D. Searle indicted for fraud but both US Prosecutors hired on with the defense team, so they revoked the petition for approval.  At the end of this URL is the documentary: “Sweet Misery: A Poisoned World”  – https://livelovefruit.com/aspartame-puts-holes-in-brain/  See and hear from the experts how Don Rumsfeld’s got aspartame approved when the FDA said “NO”.  The public deserves the real facts.  Dr. Erik Millstone in England just released a new study showing aspartame was never proven safe:  https://archpublichealth.biomedcentral.com/articles/10.1186/s13690-019-0355-z    It exposes EFSA for not doing its job. I sent them info so I know it to be true and also reported them to OLAF, anti-fraud organization in Europe, for conflict of interests.    A ban on aspartame has been asked by Dr. Millstone  for the UK and EU.